Has a rich history dating back to its original inception in San Diego in 1971.  Since then, Showband West has moved with Navy Band Southwest to San Francisco, back to Naval Training Center San Diego, and finally across the bay to its current home at Naval Base Coronado. 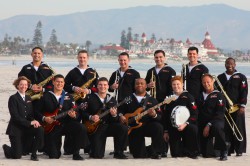 With performances at the World Expo, Monterey Jazz Festival, Pacific Coast Jazz Festival, and California Music Educators Association Convention, the 19-member Showband West prides itself in presenting authentic performances of the sounds of big band era along with a variety of contemporary music.

Under the musical direction of Musician Second Class Jesse Carmona, Showband West represents the Commander, Navy Region Southwest in a broad range of functions including clinics for high school and college musicians, Navy Recruiting initiatives and public concerts throughout the Southwestern United States.